Now appearing in the Buffett-Munger Screener: Trex Company Inc. (TREX, Financial). As such, it made it through the screener because of its high predictability rank, its possession of protective moats, very little debt and slumping share price.

But has that share price fallen far enough to attract the attention of value investors? That will be one of the critical questions for potential buyers.

The company says on its website that it invented, defined and perfected the composite deck category. In addition, it claims it is the world’s largest manufacturer of wood-alternative decking and railing products.

Trex began with a buyout of a division of the Mobil Corp. (now ExxonMobil (XOM, Financial)), and followed up by going public in 1999. The company attributes its success to innovation, saying, “As the first company to combine the durability of recycled plastic with the natural beauty of reclaimed wood in a high-performance decking product, we lead the way in applying this proprietary technology to a wide variety of outdoor applications for low-maintenance, luxurious outdoor living.” 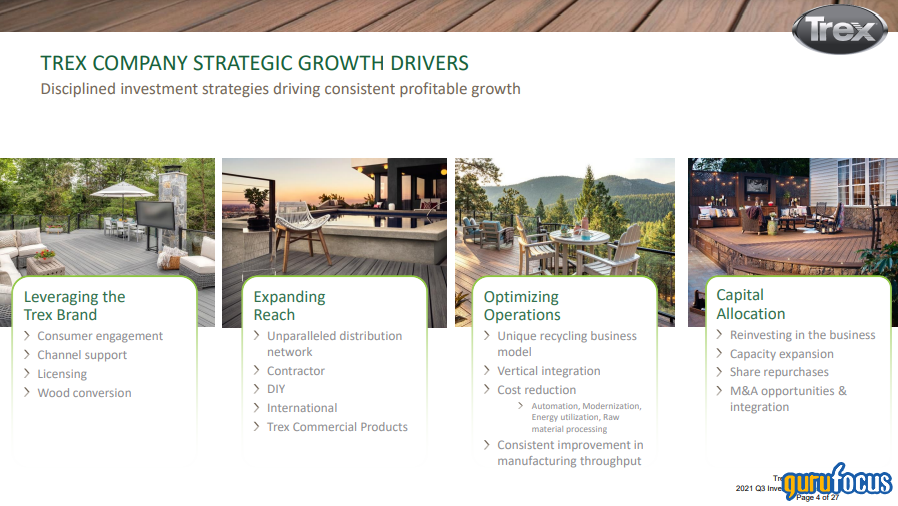 And it lists four growth initiatives:

Trex lists wood as its primary competitor. Its presentation notes that wood currently holds 75% to 76% of the decking market, while composite has 24% to 25%.

Each 1% of the market it can take from wood decking manufacturers is worth more than $50 million.

Composite decking has four competitive advantages over wood decking; it does not:

In addition, 95% of its raw materials come from recycled or reclaimed materials, giving it an edge with environmentally-focused consumers.

Data confirms those advantages or moats. For example, Trex had (construction) industry-leading margins and a robust return on invested capital of 27.38% at the end of its third quarter (Sept. 30, 2021).

In its 10-K for 2020, it reported that the Azek Company Inc. (AZEK, Financial) and Fiberon (a division of Fortune Brands Inc. (FBHS, Financial)) were its main rivals among composite decking companies.

Also in the 10-K, it shows itself easily outperforming two peer indexes: 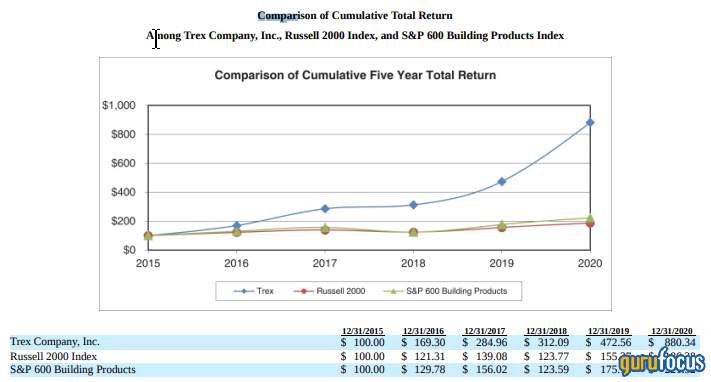 According to the company’s 10-K, there are numerous risks, including: 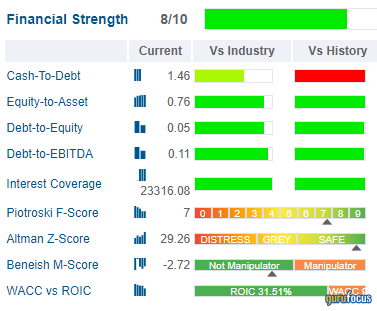 As the table and score indicate, Trex is a financially solid performer, with practically no debt and excellent metrics.

Take notice of the ratio at the bottom of the table, where we see the return on invested capital at 31.51% is roughly triple the weighted average cost of capital at 10.57%. This tells us the company is well managed and should throw off lots of free cash flow. The chart below shows it is—after recovering from recent pullbacks. 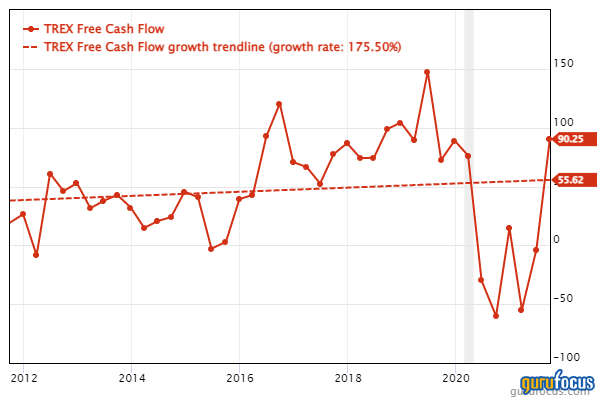 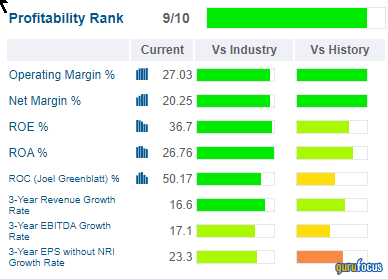 Again, an excellent score. As all the dark green bars indicate, the company is leading the construction industry in profitability metrics. The only two exceptions, in industry terms, are the light green bars for Ebitda and earnings per share. Even they are light green, indicating above-average, but not excellent, results.

This 10-year chart displays more detail about the growth of revenue, Ebitda and earnings per share. 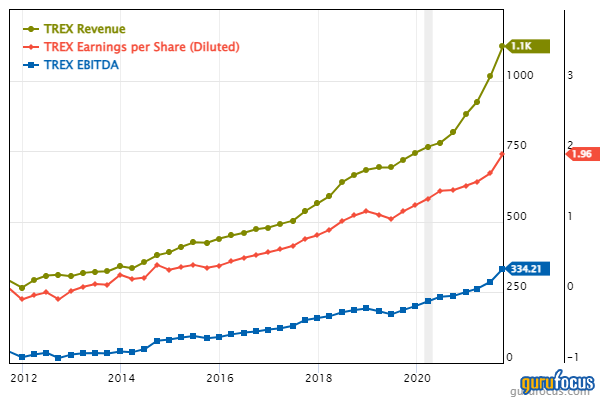 The following chart shows how Trex has outperformed AZEK and Fiberon despite recent pullbacks. 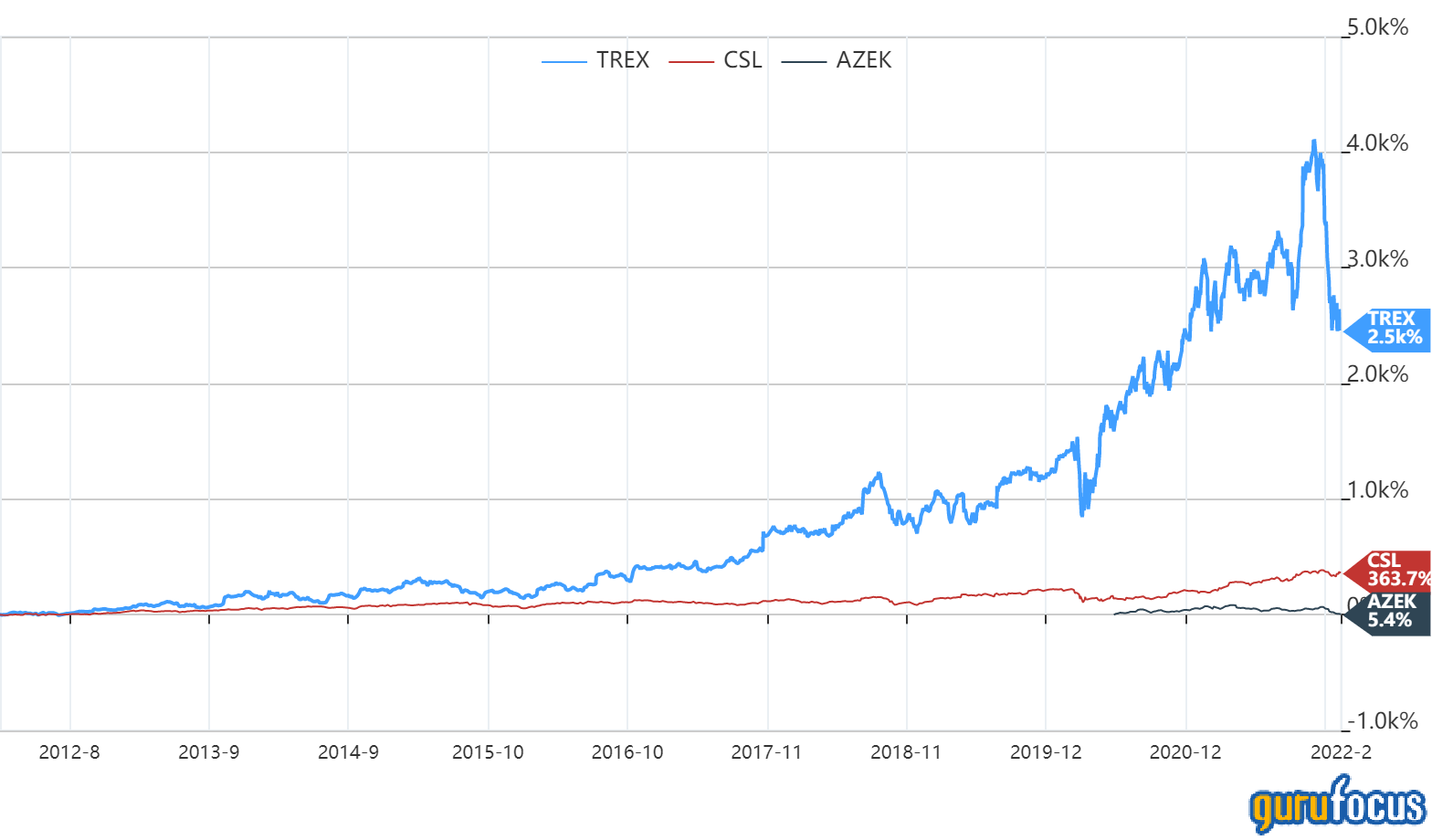 Its annual returns have been:

Total annual returns over the past five years:

Trex does not pay a dividend, but has been whittling away at its shares outstanding, reducing them by an average of 1.76% per year over the past decade. 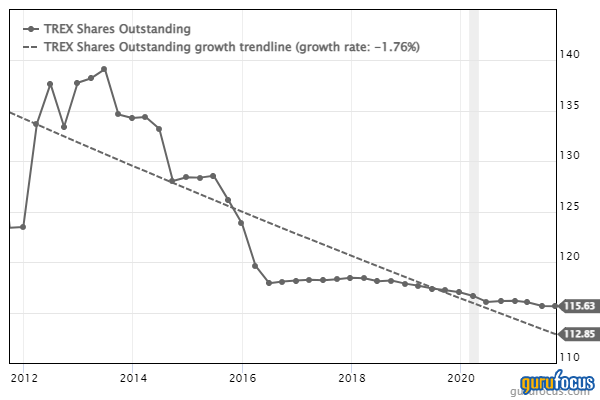 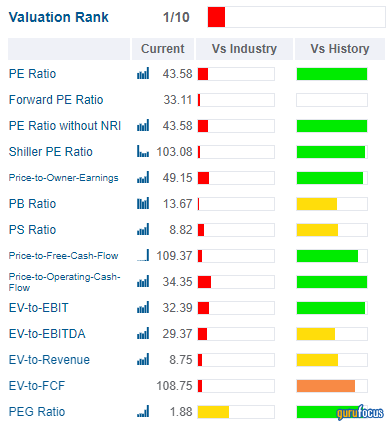 Over the past five years the share price rose rapidly, then plunged along with most of the market after Dec. 10, 2021. 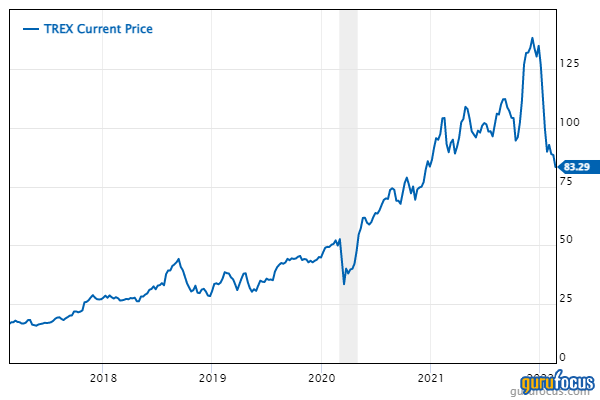 The PEG ratio, the valuation metric for the Buffett-Munger screener, comes in at 1.88. That’s a bit high, considering the fair value mark for the ratio is 1. The five-year Ebtitda growth rate is 23.20% per year.

Digging a little deeper, we can check the bars adjacent to the PEG ratio on the table. The yellow bar indicates its ratio is about average for the industry and the green bar indicates that it is lower than it has been in the past 10 years. Perhaps this is about as low as the PEG ratio goes without another dip in the share price.

The GF Value Line assigns it a rating of fairly valued. 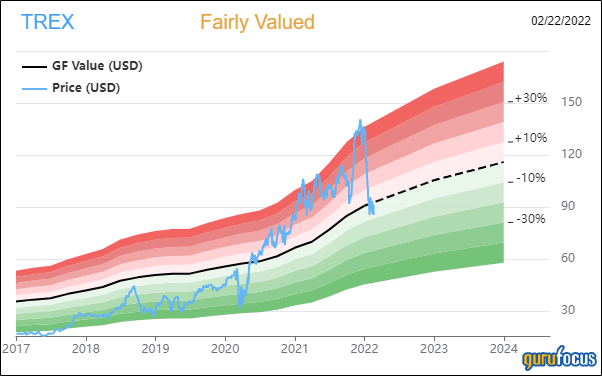 When the growth rate in the growth stage is set at 19%, the discounted cash flow calculator shows the stock is fairly valued.

The metrics give us several degrees of valuation, from modestly undervalued to modestly overvalued. For investors who would split the difference, the verdict would likely be fairly valued.

And that, of course, fits with the Buffett-Munger mandate of good companies at fair or undervalued prices.

The guru sentiment about Trex has been predominantly bearish.

Five of the investing giants held shares in Trex at the end of December. The three largest holdings belonged to:

Could Trex become a stock for value investors, as well as one for investors who like Buffett-Munger stocks? I think so, especially if the share price dips a bit further.

From the perspective of value investors, the company has only a small amount of debt and what is likely a fair valuation. Moreover, thanks to at least a couple of moats, it enjoys strong profitability metrics. What’s more, it has strong growth prospects and may keep delivering industry-leading returns for the next five to 10 years. And like other Buffett-Munger companies, it has a high predictability rating.

It is, as the screener describes, a good company at a fair or undervalued price.

Wed Feb 23 , 2022
&#13 &#13 Star Alliance has expanded its paid out lounge accessibility product or service to their award-winning, state-of-the-art lounge at Los Angeles Worldwide Airport (LAX). The lounge will now welcome company who in any other case would not be qualified, on a paid entry basis. &#13 &#13Related Posts:Charter and Clearfield […] 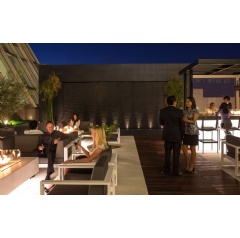