In the third quarter of 2021, which ended on Sept. 30, U.S. stock markets kept marching steadily higher as the combination of easy monetary policy, economic recovery and inflation made stocks arguably the safest asset class to invest in. The U.S. Federal Reserve remained dovish throughout the quarter, with Federal Reserve Chairman Jerome Powell only beginning to consider winding down bond purchases now that we’re well into the fourth quarter and inflation has proven persistent rather than merely transitory.

The major indexes once again reached new unprecedented highs. The S&P 500 surpassed 4,500 for the first time in history during this period, while the Nasdaq topped 15,300 and the Dow Jones Industrial Average beat the 35,500 mark.

The Buffett Indicator, a popular valuation metric for stock markets that works by comparing the ratio of total market cap to gross domestic product, stands at 199.1% as of Dec. 2, indicating the U.S. stock market is significantly overvalued. This metric is named after
Warren Buffett (Trades, Portfolio), who famously called it “probably the best single measure of where valuations stand at any given moment.”

Even when we factor in Fed support for asset prices, the valuation ratio of the Buffett Indicator stands at 144.9%, which is still overvalued, though not by quite as much. At this level, if the stock market were to revert to its median historical ration of total market cap to GDP, the average returns would be around -0.8%. It should be noted that Fed support disproportionately benefits the nation’s largest and most financially inefficient companies.

Despite high valuations all around, the value investing gurus have still found plenty of names they believe are worth allocating more money to. According to GuruFocus’ Hot Picks, a feature which allows investors to screen for the stocks that had the highest number of guru buys or sells based on the most recent regulatory filings, the five most popular stocks among gurus during the third quarter of 2021 (as determined by net buys) were Omnicom Group Inc. (OMC, Financial), Intel Corp. (INTC, Financial), Waters Corp. (WAT, Financial), Zimmer Biomet Holdings Inc. (ZBH, Financial) and Lockheed Martin Corp. (LMT, Financial).

Omnicom Group (OMC, Financial) is a global media, marketing and corporate communications company based in New York. Through its network of subsidiaries, the company provides advertising, customer relationship management, public relations and specialty services in more than 100 countries.

During the quarter, 13 gurus bought shares of Omnicom while only two gurus sold the stock, resulting in 11 net buys. As of the quarter’s end, there were 15 gurus with a stake in the company. We can see in the chart below that gurus have been net buyers of the stock for the past four quarters. 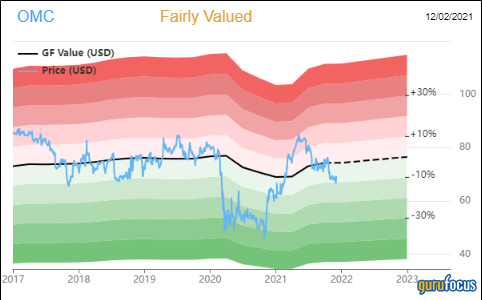 Omnicom’s stock price growth has stagnated along with its top and bottom lines since around 2014. However, the company has robust financials and good profitability, with a Piotroski F-Score of 9 out of 9 and an operating margin of 15.43%, which outperforms 79% of industry peers. It also has an attractive dividend yield of 4%.

What it’s been lacking is an avenue for meaningful growth. Things could be looking up on the growth front as the advertising sector rebounds in force from 2020, when many companies slashed advertising budgets due to the uncertain situation in the beginning of the pandemic. As sales have picked back up for most companies, advertising has become a priority for those seeking to take advantage of recent market weakness to expand their operations.

Intel (INTC, Financial) is a semiconductor technology company based in Santa Clara, California. The company is the world’s largest producer of PC microprocessors, and its mobile processors have been a key driver of growth in recent years. It is also aiming to become a chip foundry in efforts to revive growth.

During the quarter, 20 gurus bought shares of Intel while 10 gurus sold the stock, resulting in 10 net buys. As of the quarter’s end, a total of 29 gurus had a stake in the company. The chart below shows gurus have been net buyers of the stock for five quarters in a row. 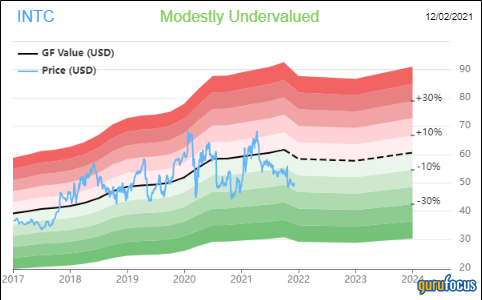 Intel’s valuation has been trading in the same range for the past three years as the company’s turnaround efforts and long-held market leadership contrast with repeated failure to meet project deadlines and stay ahead of the competition in terms of innovation. For example, last year, the company delayed its 7nm process node, which was already at least 12 months behind the company’s internal roadmap. The company eventually ended up pushing back the release date of its 7nm chips to late 2022 or early 2023.

The situation could finally be reaching a turning point for Intel with the global chip shortage providing an opportunity for the company to become a chip foundry, which is a company that manufactures microchips for others. Most U.S. companies outsource the production of their chips overseas, where labor is cheaper, but that may become impractical for some due to shortages and the U.S. government’s newfound interest in making some of these tech manufacturing jobs local again.

Waters (WAT, Financial) is a manufacturer of analytical laboratory equipment with headquarters in Milford, Massachusetts. It is a leading global provider of lab equipment, supplies and software to scientists as well as universities and diagnostic clinics.

During the quarter, 10 gurus bought shares of Waters, but among all the Premium gurus followed by GuruFocus, there were none who were selling the stock. As of the quarter’s end, those same 10 gurus were the only ones holding the stock. We can see in the below chart that gurus have been mostly buying the stock in recent quarters. 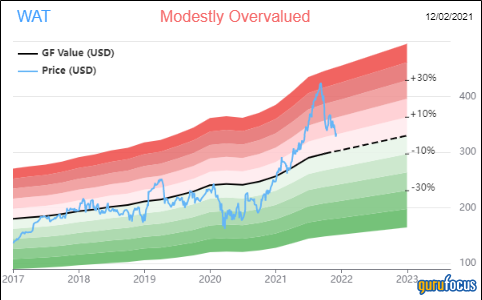 Despite reporting a strong third quarter and issuing guidance for sales growth in the 15% to 16% range for next year, Waters saw its stock price drop, perhaps because investors had become accustomed to higher growth numbers due to easy comparisons from 2020. This doesn’t change the fact that the company will be a key beneficiary of the growth of the pharmaceutical and biotech sectors as a “pick and shovel” play.

Based in Warsaw, Indiana, Zimmer Biomet Holdings (ZBH, Financial) is a medical technology company that designs, manufactures and sells robotics, software and device solutions to support orthopedic surgeons and clinicians in restoring mobility to patients.

During the quarter, 15 gurus bought shares of Zimmer Biomet while six gurus sold the stock, resulting in nine net buys. As of the quarter’s end, the stock was in the portfolios of 19 gurus. Gurus were mostly selling the stock over the past couple of years, followed by a sudden uptick in buying in the recent quarter. 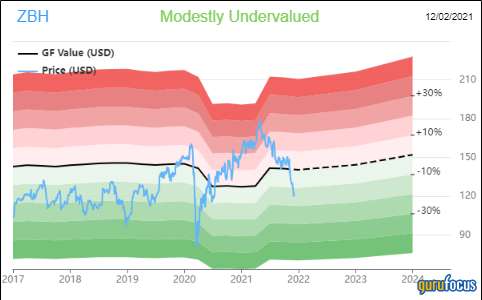 At the cutting edge of innovation in robotics for orthopedic surgery assistance, Zimmer Biomet is expected to benefit from the health care industry’s increasing adoption of technology to improve surgeries and reduce the capacity for human error.

While the stock has sold off in recent months following the company’s increase in the range of its guidance, lowering the low expectation and increasing the high expectation, the long-term outlook for its business remains attractive. It is continuing to innovate and launch new products, and revenue is expected to grow between 14% and 17% next year.

Headquartered in Bethesda, Maryland, Lockheed Martin (LMT, Financial) is an American aerospace and defense giant with interests around the world. It is primarily engaged in the design, development, manufacture, integration and sustainment of various defense-related technologies.

During the quarter, 15 gurus bought shares of Lockheed Martin while six gurus sold the stock, resulting in nine net buys. As of the quarter’s end, 22 gurus held the stock in their portfolios. Gurus have been net buyers of the stock for the past four quarters. 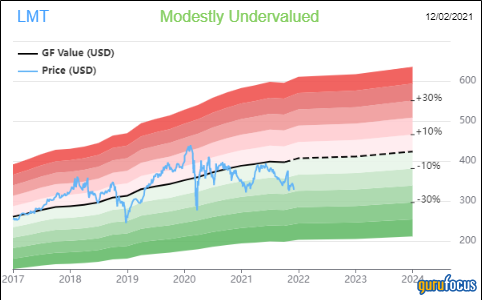 One concern with Lockheed Martin is the affordability of some of its programs. For example, the F-35 has a cost per flight hour of $36,000, which is high enough that the U.S. Air Force has begun to review whether this top technology is worth the high price tag when cheaper options might provide more value for the same money.

As a defense company operating on a global scale, Lockheed Martin is expected to benefit from increasing government spending on defense and weaponry as well as cybersecurity. Its main customer is the U.S. government, which is where the vast majority of its revenue comes from. Lockheed Martin has a long-established reputation in the industry, making its revenue stream generally predictable and reliable, and its dividend yield of 3.19% is more than double the industry average.

Fri Dec 3 , 2021
And to assistance you come to a decision which deal is ideal for you, we have set alongside one another a guide with everything you have to have to know about each of Sky’s newest offers. Ultimate Tv You can get limitless amusement with Sky’s Final Television package deal. The […]