Fewer value stocks have been available since the Covid-19 pandemic recovery took hold. Still, 161 of them currently have valuations low enough to make it through the Undervalued Predictable screener at GuruFocus.

Most of them are banks or financial stocks, but there are a few in other categories. One of the latter is Patrick Industries Inc. (PATK, Financial), which describes itself in its 2020 annual filing as “a major manufacturer and distributor of component and building products and materials serving original equipment manufacturers (‘OEMs’) primarily in the recreational vehicle (‘RV’), marine, manufactured housing (‘MH’) and industrial markets.” 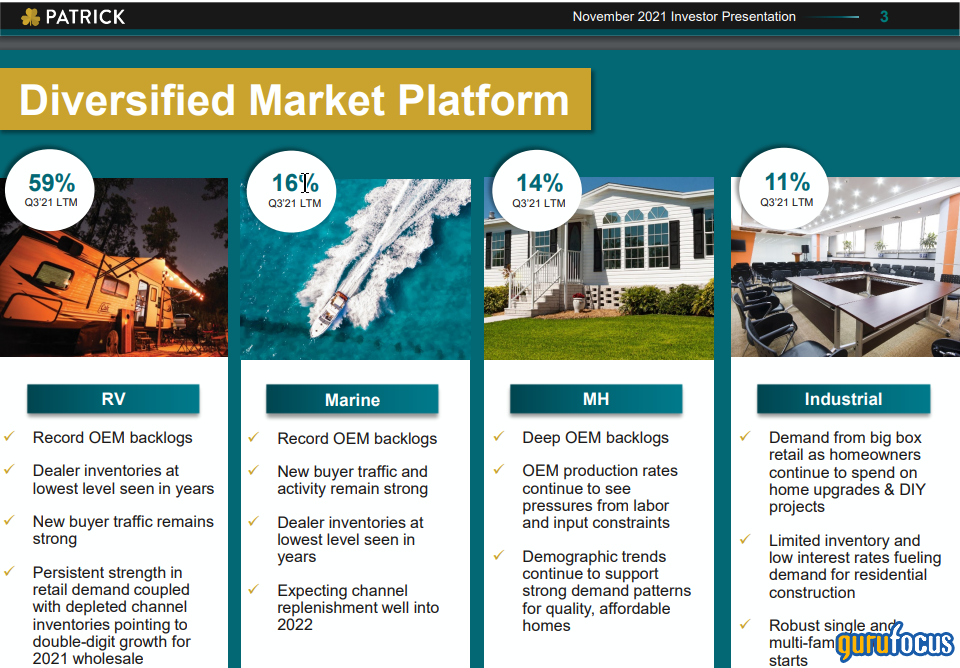 This illustration came from a November 2021 company presentation on its third-quarter results, with year-over-year results shown in the white circles. The improvements reflect the resurgence of interest—and sales—of leisure products, as well as growth in new home starts and renovations.

As an example of its business, the following slide shows the products Patrick supplies for the exteriors of RVs: 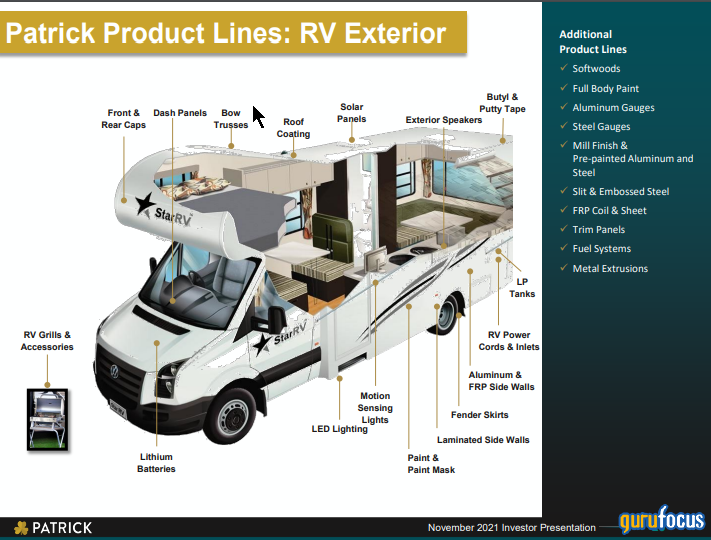 Based in Elkhart, Indiana, Patrick has grown both organically and through acquisitions. In the presentation (published in November), the company reported it had made 23 acquisitions in the “Leisure Lifestyle” industry (RVs and Marine) since 2018. In addition, it had added four acquisitions in the Housing and Industrial segments.

In its third-quarter release, the company sounded an optimistic note on 2022. CEO Andy Nemeth wrote:

“Retail demand for leisure lifestyle products remains high, and has resulted in decreasing dealer inventories and increasing OEM backlogs despite record industry production levels. At the same time, our sales to the housing and industrial markets continue to benefit from low dealer inventories, attractive financing rates and robust home improvement and remodel activity.”

Patrick has noted in the 10-K that all four of its markets are highly competitive, mainly because of low barriers to entry. The competition includes both manufacturers (through vertical integration) and other components suppliers.

Although there are no direct competitors on a national basis, GuruFocus offers a few publicly-traded names that compete in one way or another:

Their comparative performances are shown below in the Performance section. 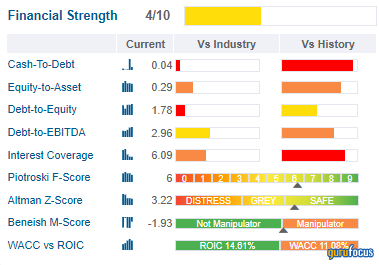 With a score of just 4 out of 10, you know there are likely debts in the background. This chart, which compares cash and debt until the end of fiscal 2020, makes that clear: 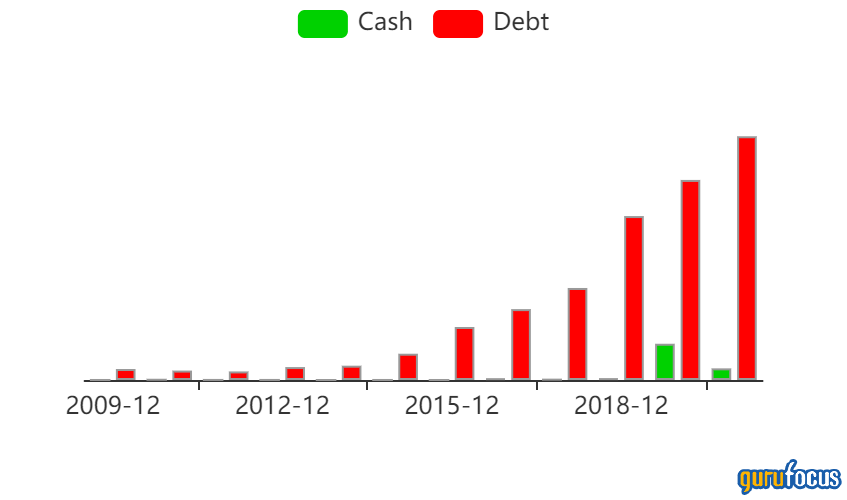 Potential investors obviously need to watch that ratio. The Altman Z-Score, which measures the possibility of bankruptcy, is 3.22 and in the “safe” zone, but again, barely (3.00 is the minimum to get a safe rating).

As long as the company can continue to earn more on its equity and borrowed capital than it pays for it, it should remain financially stable. As the table tells us, the return on invested capital is 14.61%, more than three points above the weighted average cost of capital at 11.08%. 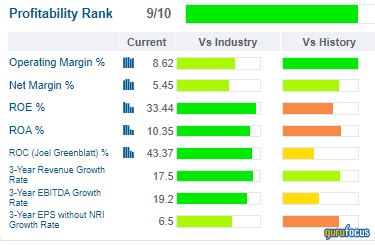 The company receives an excellent score for profitability, led by the operating and net margins. Both come in ahead of the median margins for the vehicles and parts industry.

The table also shows Patrick has a leadership position in the industry regarding return on equity and return on assets. On the former metric, it posts a higher ROE than 95% of companies in the industry.

On the growth lines, all rates are favorable but note that Ebitda is stronger than revenue, indicating the company has become more efficient or effective in its business operations over the past three years.

The earnings per share growth rate of 6.50% annually over the past several years is respectable and should not overshadow how well the company has done over other periods:

As we might expect from a small, growth-oriented company, the dividend is not likely to attract investors. Yet, the dividend might have been significant had the share price not risen so sharply over the past year and a half.

The dividend payout ratio is also low, providing ample room for growth should the company slow its acquisitions and capital expenditures.

Despite the ups and downs in this chart of shares outstanding, the needle really hasn’t moved too far. The high, set in December 2017, was 24.64 million shares, roughly 1.5 million shares more than the 23.09 million shares it has currently. 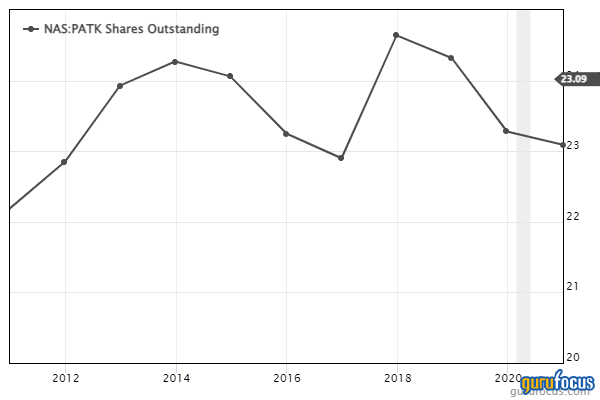 As the following table shows, nearly three-quarters of its shares belong to institutional investors.

Patrick has outperformed its peers, Gibraltar and JELD-WEN, over the past decade: 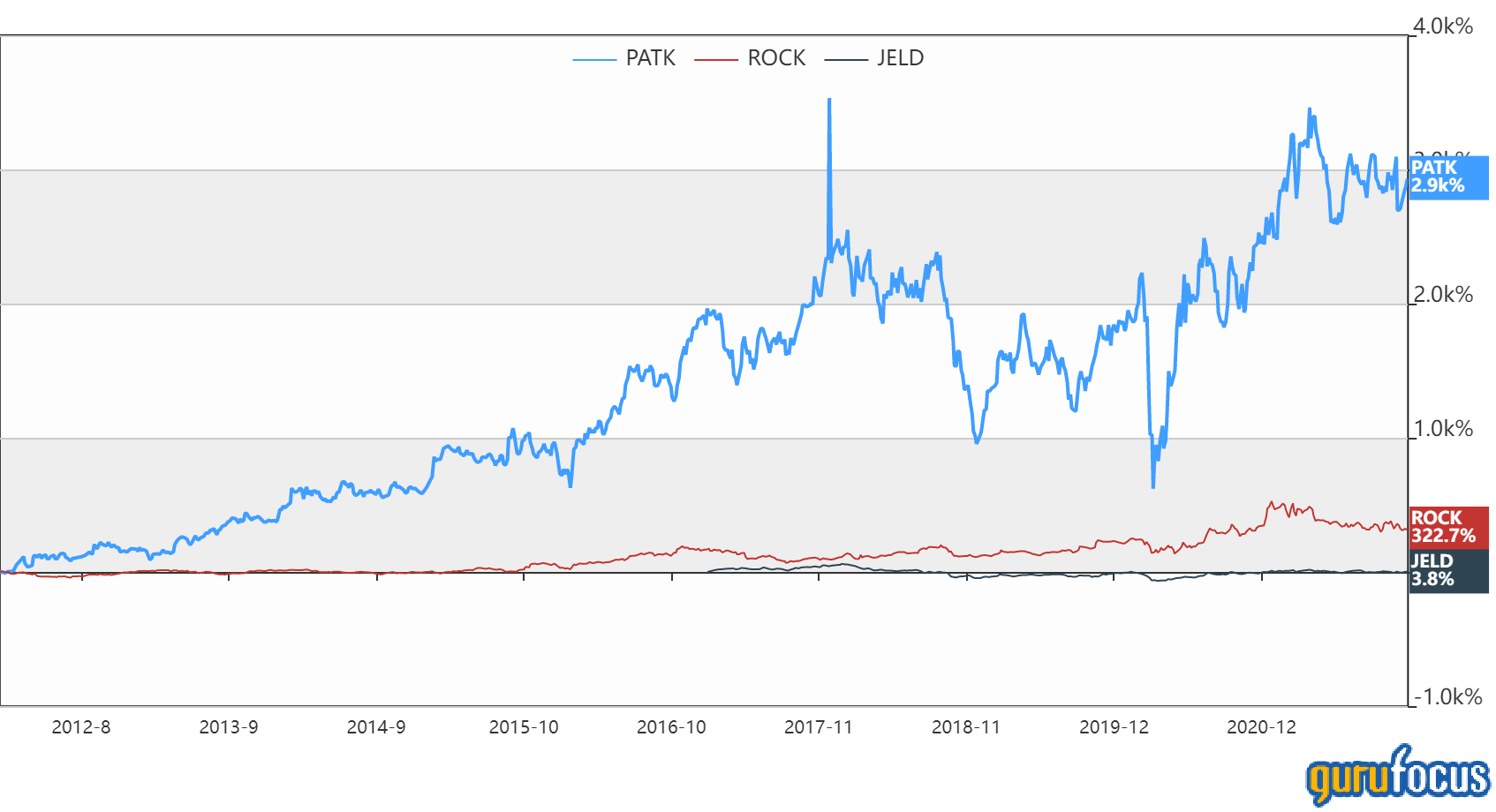 Over past periods, it has posted the following annual returns: 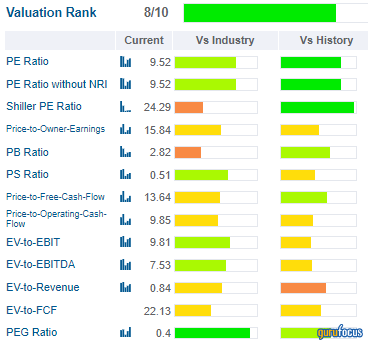 To join the Undervalued Predictable list, a company must have a margin of safety as calculated with the discounted cash flow process. A DCF calculation can be based on earnings or on free cash flow; in its analysis pages, GuruFocus indicates which of these is more appropriate. For Patrick, it recommends the earnings approach.

The degree of confidence in a DCF analysis depends on the predictability or consistency of earnings. Patrick has earned a rating of 4.5 out of 5, indicating we can be reasonably confident in the results (assuming we agree with the default assumptions in the model).

The analysis leads to a high margin of safety: 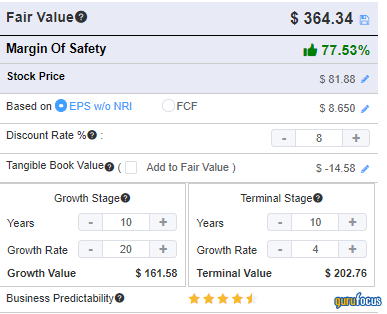 Using the FCF approach, the calculator estimates the fair value at $254.49, which would mean a 67.83% margin of safety.

The PEG ratio stands at 0.39, much lower than the fair price point of 1. The company has had a high Ebitda growth rate, an average of 24% per year over the past five years (five years is the standard for calculating PEG, while three years is shown in the profitability table).

The investing experts followed by GuruFocus have bought more often than they have sold over the past two years:

At the end of the third quarter of 2021, four gurus held stakes in Patrick; the three largest holdings were those of:

Undervalued Predictable stocks have two critical advantages. First, as the name suggests, they are undervalued based on a DCF analysis; second, they have shown predictable earnings growth.

Those are two pillars upon which a value stock might be chosen. But value investors also want a third pillar: little or no debt. Patrick Industries fails on that metric, although its interest coverage is (barely) adequate and its Altman Z-Score is (barely) in the safe zone. Essentially, that rules out the company as a value proposition for all but aggressive value investors.

It can also be ruled out as an income stock. The rapid increase in the share price over the past 10 months has put dividend income in the rear-view mirror.

Growth investors who want small-cap candidates may wish to take a closer look at Patrick. The company’s Ebitda and annual returns have shown strength and, as long as the company uses debt for organic growth and acquisitions, there should be more growth over the next five years.

Sat Jan 8 , 2022
How would you characterize the way small caps performed in 2021? Francis Gannon It was certainly an inconsistent year for the asset class overall. And while a positive return is always welcome—the Russell 2000 Index advanced 14.8% in 2021—we understand why investors might be disappointed in small-cap’s relative results. Small-caps […]