The S&P 500 Index is currently trading with a price-earnings ratio in the mid-30s range. This is well above the normal figure and implies that the market is very expensive.

There are, however, names that trade with an attractive valuation compared to their respective industries, historical multiples and intrinsic values.

I will look at two such names that could provide nice returns for investors.

Hillenbrand Inc. (HI, Financial) is the holding company of Batesville Casket Company, a leading provider of funeral services, such as burial caskets, cremation caskets, urns and personalization products, in North America. The company also manufacturers process- and material-handling industrial equipment. Hillenbrand has a market capitalization of $3 billion and generates annual revenue of $2.5 billion. 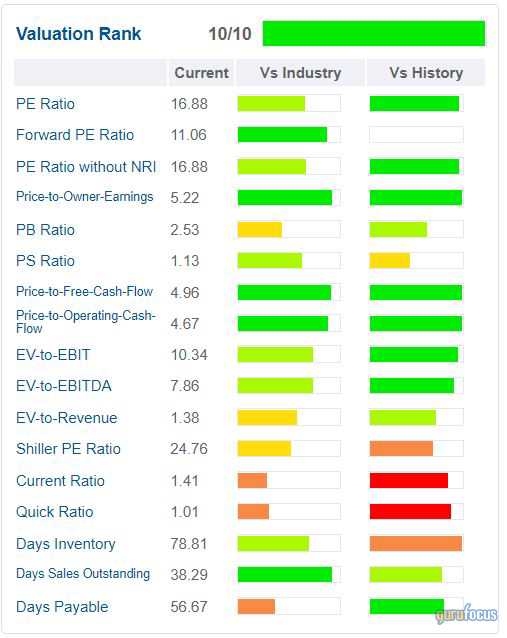 Hillenbrand receives a perfect score of 10 out 10 on valuation rank from GuruFocus. Both the trailing price-earnings ratio and price-earnings ratio without non-recurring items of 16.9 are lower than nearly two-thirds of the more than 2,000 companies in the industrial products category. This multiple is also on the very low end of Hillenbrand’s 10-year range.

The forward multiple is even lower at just over 11 times earnings and is better than 87% of the peer group. Looking at either the historical or forward price-earnings ratio paints Hillenbrand as undervalued relative to peers and its own record.

Elsewhere the story is much the same. Price-to-owner earnings is better than 92% of the industry group while matching the lowest ratio seen in the last decade. This means that Hillenbrand is creating value for its shareholders, but the market is paying a low multiple for this. This could imply that investors are underestimating Hillenbrand’s ability to create value.

Price-sales does come in ahead of nearly two-thirds of the industry, but are in the lower half of Hillenbrand’s long-term range.

There are some issues to note. The company’s quick ratio and current ratio are worse than 72% and 70%, respectively, of its peers. Both ratios are also near their worst showing for the last decade for the company. That said, the quick ratio is just above 1, which is slightly higher than what is considered a normal figure and likely means that Hillenbrand has enough assets to instantly liquidate, if needed, to cover its current liabilities. The current ratio might not fit exactly into the ideal range that many investors have of 1.5 to 2, but it does show that the company has sufficient cash to meet its liabilities.

Shares look attractive compared to their intrinsic value as well. 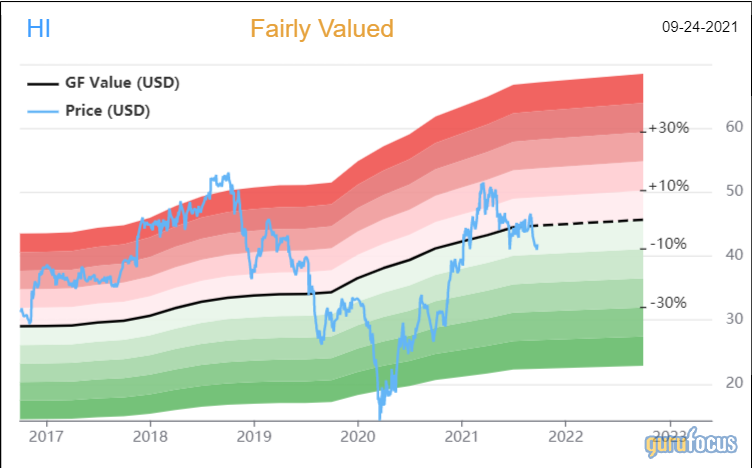 Shares of Hillenbrand trade hands at $41.84 at the moment and have a GF Value of $44.76, resulting in a price-to-GF Value of 0.93. GuruFocus rates the stock as fairly valued, but shareholders could see a return of almost 7% from here were shares to trade with their GF Value. And that is before you factor in the stock’s dividend yield.

Besides being undervalued through the prism of a host of valuation methods, Hillenbrand also pays a yield of 2.1% today. That may not seem like much, but it is superior to the average yield of the S&P 500 Index.

Hillenbrand has increased its dividend for 12 consecutive years, often with a raise of 1 cent per year. Dividend growth has been muted as the compound annual growth rate is just above 1% since 2011. The company makes up for lack of growth with a very healthy payout ratio. With an annualized dividend of 86 cents and Wall Street analysts expecting earnings per share of $3.69, Hillenbrand has a projected payout ratio of just 23%. This compares to the average payout ratio of 41% that the stock has had since 2011.

Hillenbrand is a market leader in a niche category, but trades with a low earnings multiple. The stock is also undervalued using a number of different metrics, which means the market could be mispricing the name. With a solid business model, a cheap valuation and the potential for high single-digit total returns, Hillenbrand could be a good pick for a conservative investor.

Walgreens Boots Alliance Inc. (WBA, Financial) is a leading retail pharmacy company with operations in the U.S. and Europe. The company is valued at $41.5 billion and produces annual revenue of $140 billion. 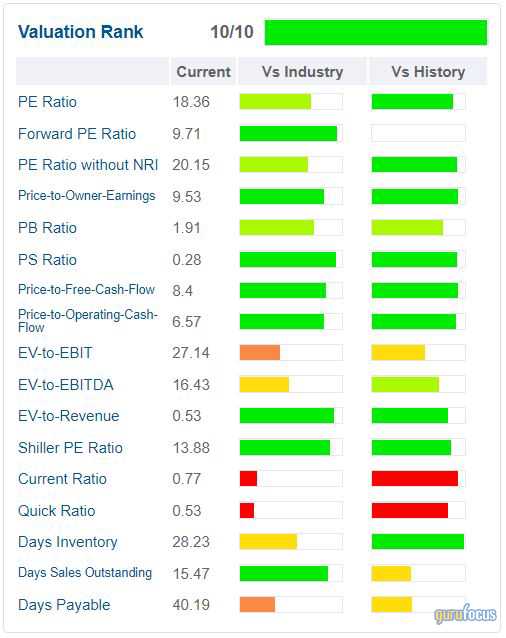 Walgreens also has a perfect 10 out of 10 rating on valuation rank. The stock’s trailing 12-month price-earnings ratio of 18.4 is lower than 70% of the 356 companies in the health care providers and services industry. This is almost at the very bottom of Walgreens long-term range. The price-earnings ratio without non-recurring items is slightly higher at 20.2, but still comes out ahead of two-thirds of the company’s peer group and is at the very bottom of the 10-year range.

The price-to-owner earnings is better than 83% of the competition, so investors are not yet paying up for Walgreens’ value creation. This ratio is one of the lowest for the last 10 years.

The price-to-sales ratio is a minuscule 0.3, which bests 94% of the industry. This is just above the lowest valuation in a decade.

As with Hillenbrand, Walgreens has very low cash flow multiples. The price-to-free cash flow of 8.4 is better than 84% of peers while the price-to-operating cash flow of 6.6 is lower than 83% of the industry. The market has yet to pay up for Walgreens cash flow generation, which could mean that investors aren’t properly valuing the stock at the moment. Both ratios are also near the best the company has produced in the last 10 years.

Also like Hillenbrand, Walgreens doesn’t score well with its ability to cover liabilities. However, Walgreens’ ratios are more worrisome. The quick ratio of 0.5 is worse than 87% of peers. The current ratio of 0.8 is below 84% of the industry. Both ratios are near the worst showing for Walgreens over the last 10 years and means that Walgreens doesn’t have the sufficient means to cover its liabilities at the moment. These are metrics worth keeping an eye going forward.

Walgreens does have the potential for solid total returns when considering the stock’s intrinsic value. 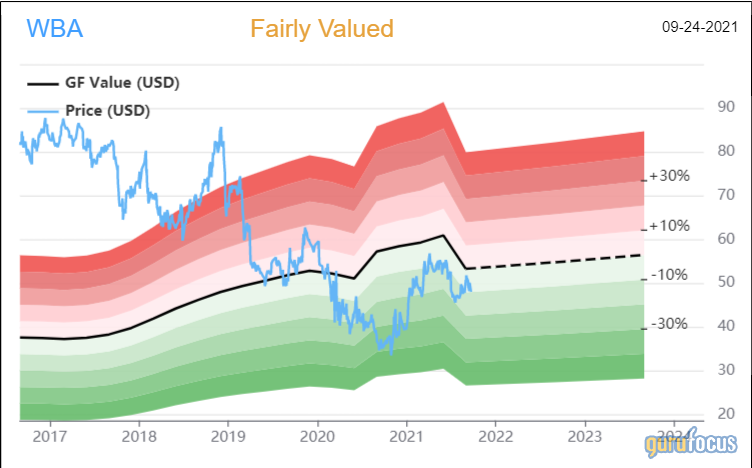 Walgreens has a share price close to $48 at the moment. With a GF Value of $53.36, the stock has a price-to-GF Value of 0.90. Shareholders could be in line for 11.2% return from current levels if the stock matched its GF Value.

The stock is paying a 4% yield today and the dividend has compound annual growth rate of 8.7% since 2011. The company has raised its dividend for 45 consecutive years, putting it very close to achieving Dividend King status. This will likely occur given Walgreens’ payout ratio. The annualized dividend of $1.91 would consume just 40% of the expected earnings per share of $4.82 for the year. This compares slightly unfavorably to the long-term average payout ratio of 35%, but not to the point where a dividend cut is likely at all. Combining the possible share price appreciation with the dividend and shareholders of Walgreens could see mid-double-digit returns.

Walgreens has a clear leadership position in its industry with a size and scale that few can match. Even so, the stock trades with a low valuation on many different metrics. Add in a long history of dividend growth and generous yield and Walgreens has something to offer growth, value and income-oriented investors alike.

Mon Sep 27 , 2021
&#13 &#13 Redbeat Academy, the edutech arm of airasia digital is established to present a broader selection of obtainable, bigger educational teaching courses on redbeatacademy.com, made attainable by its partnership with UNITAR Global College. &#13 &#13 The collaboration in between Redbeat Academys Instructor-Led Teaching & On-Demand Studying system and UNITARs […]